If you have ever wondered why the Grandvalira logo resembles a “X”, today we bring you the answer.

When visiting the El Tarter sector, you can find the well-known Àliga slope. This slope is approved by the International Ski Federation FIS and has hosted on more than one occasion the Alpine ski World Cup.

Its characteristics and the way it has been conditioned make it a unique location that offers an unforgettable experience for both skiers and spectators.

The Àguila slope is made up of two independent slopes that at one point intertwine with each other forming a big “X”. And yes, this is what gives meaning to the Grandvalira logo!

On one side we have the Àliga SG slope, which is the one that descends from right to left in the image and has the following characteristics:

On the other hand we have the Àliga SL track which is the one that descends from left to right in the image and that was recovered to be able to host the slalom trials. Its characteristics are as follows: 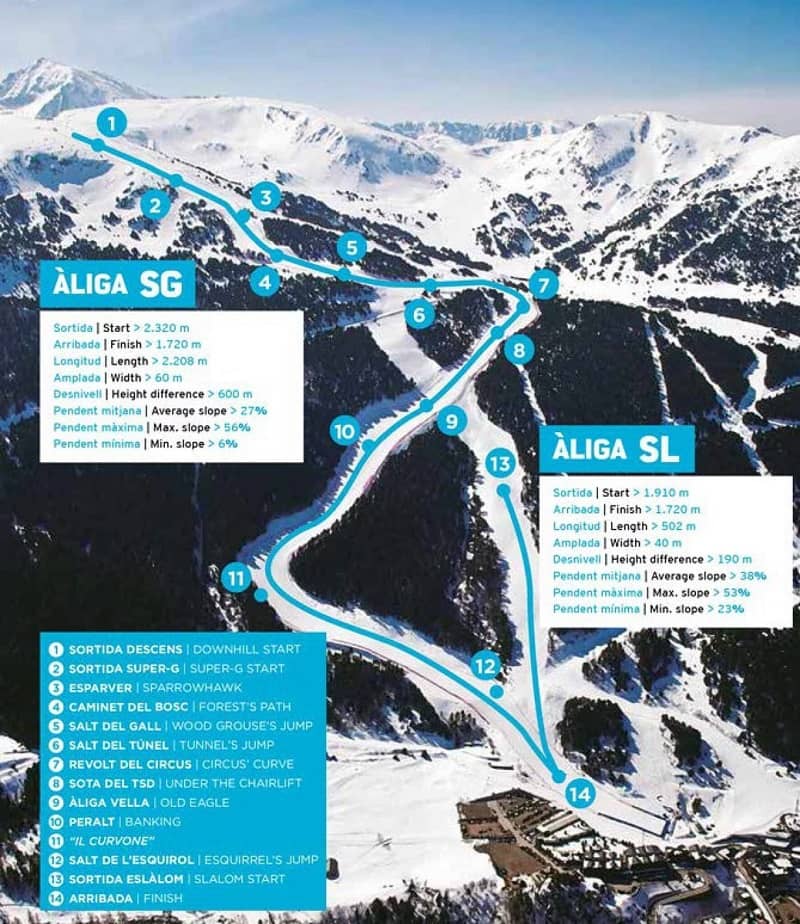 Between 2012 and 2013 took place the remodeling and refurbishment of the Àguila track in which around 3 million euros were invested. During these years, trees were cut down to widen the track, a lateral protection net was installed, timing cables, an artificial snow production network, and a public address system, among others. These changes allowed it to meet the conditions that made it an FIS-approved track and in 2014 the first downhill race in the Iberian Peninsula was held.

Events at the Àguila slope

The Àliga slope is a meeting place for lovers of snow sports where we can see the debut of the best athletes of the world skiing scene as Marcel Hirscher, Mikaela Shiffrin or Ingemar Stenmark.

Carolina Ruiz, one of the best Spanish skiers describes this place as: “The Àguila SG piste of Grandvalira is at the level of the best speed slopes in the world”.

Some of the events that have taken place in this emblematic place are: 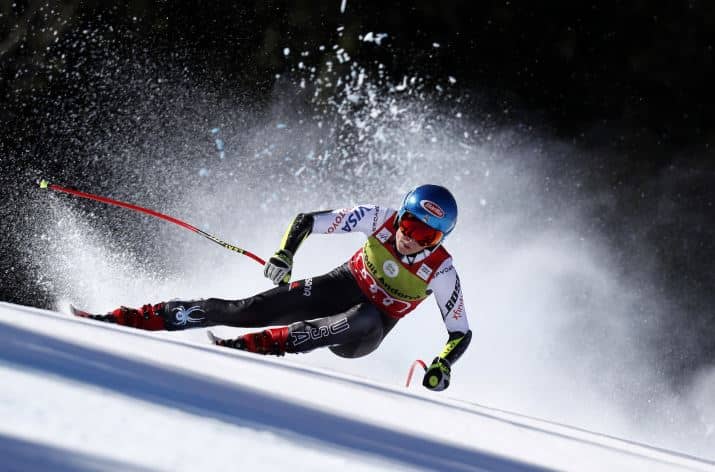 In addition to being the Àliga slope, a magnificent place, in the Tarter there are plenty of dining options and equipment to enjoy skiing whatever your level. We recommend you to read our Tarter blog where you will find the best recommendations of what to do in this special area.

Book your vacations in the Chalet of Kabano Rentals where you can continue to enjoy the L’Àliga slope, but this time from the comfortable living room, the views will not leave you uninspired! 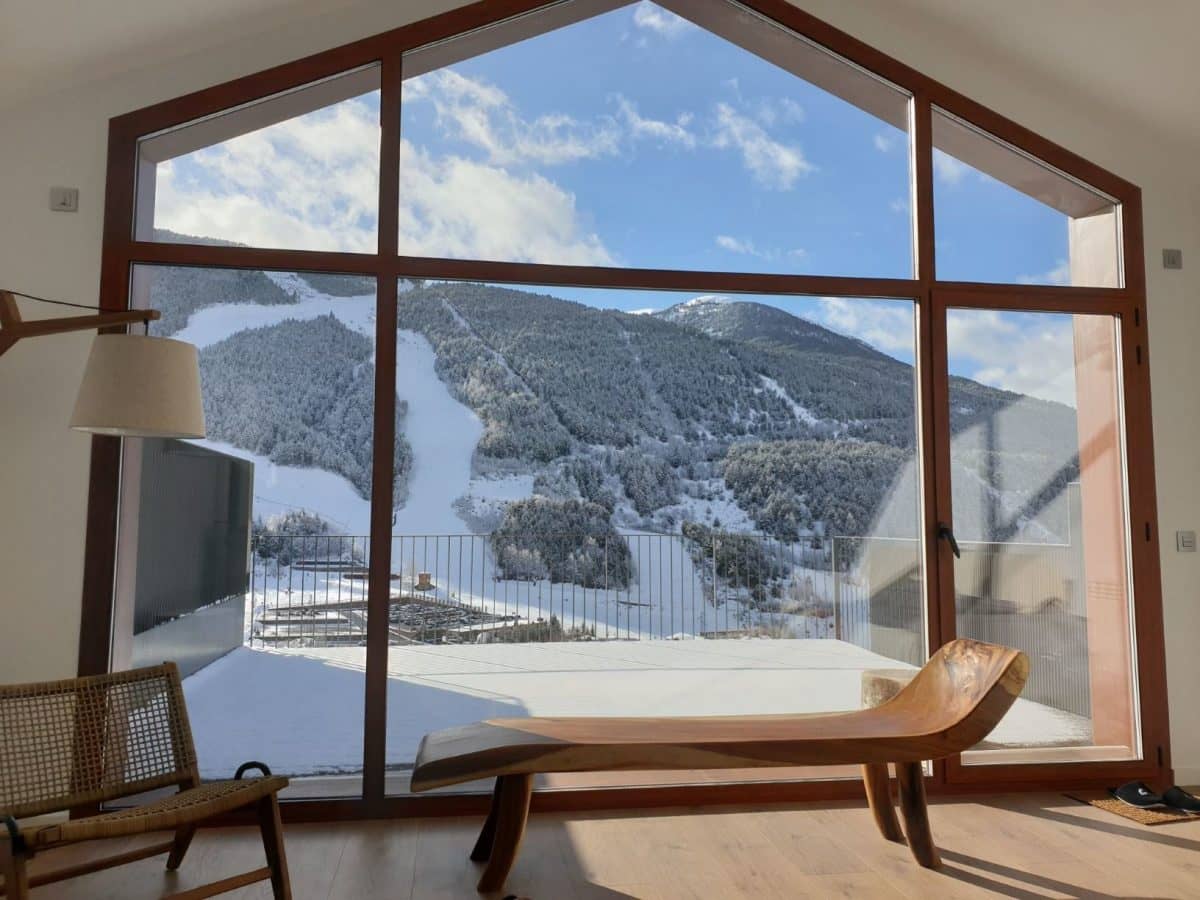 We look forward to welcoming you during your stay in Andorra

We are waiting for you…

Investment Opportunities
We use cookies on our website to give you the most relevant experience by remembering your preferences and repeat visits. By clicking “Accept All”, you consent to the use of ALL the cookies. However, you may visit "Cookie Settings" to provide a controlled consent.
Cookie SettingsAccept All
Manage consent

This website uses cookies to improve your experience while you navigate through the website. Out of these, the cookies that are categorized as necessary are stored on your browser as they are essential for the working of basic functionalities of the website. We also use third-party cookies that help us analyze and understand how you use this website. These cookies will be stored in your browser only with your consent. You also have the option to opt-out of these cookies. But opting out of some of these cookies may affect your browsing experience.
Necessary Always Enabled
Necessary cookies are absolutely essential for the website to function properly. These cookies ensure basic functionalities and security features of the website, anonymously.
Functional
Functional cookies help to perform certain functionalities like sharing the content of the website on social media platforms, collect feedbacks, and other third-party features.
Performance
Performance cookies are used to understand and analyze the key performance indexes of the website which helps in delivering a better user experience for the visitors.
Analytics
Analytical cookies are used to understand how visitors interact with the website. These cookies help provide information on metrics the number of visitors, bounce rate, traffic source, etc.
Advertisement
Advertisement cookies are used to provide visitors with relevant ads and marketing campaigns. These cookies track visitors across websites and collect information to provide customized ads.
Others
Other uncategorized cookies are those that are being analyzed and have not been classified into a category as yet.
SAVE & ACCEPT